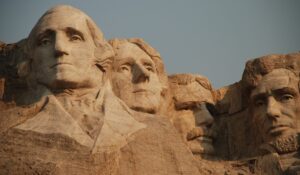 Who did more for America, a thug and petty criminal by the name of George Floyd or Thomas Jefferson, author of the Declaration of Independence and third president of the United States?

The voice of the American Revolution is being silenced by a useless pot-smoking scumbag by the name of Warren Wilhelm Jr. (alias Bill DeBlasio), the worst mayor of New York ever to occupy that office. He and his cohorts will remove the statue of Thomas Jefferson from city hall. This pitiful and ungrateful act will take place in a few weeks, ostensibly because Jefferson owned slaves in 1776. Ironically, just four months ago an obnoxious giant bronze bust of George Floyd was erected in NYC Union Square. And what did Floyd do to deserve this honor? He died of an overdose of drugs while resisting arrest for the commitment of another petty crime, just one in a long list of crimes by this thug. And what has Warren Wilhelm Jr. done for this country besides destroying the great city of New York. What gives him the moral authority to promote the removal of Thomas Jefferson, a man who, like so many others now being defamed,  pledged his life and fortune  to establish our nation, enforced the anti-slave trading act of 1808, and approved the Louisiana purchase, the largest land purchase in history. .

No one today, not I, not Warren Wilhelm Jr. can claim with certainty that we would not have been slave owners in the 18th century. We know that slavery was abhorrent, but a reality dating back to the beginning of recorded history. It was an institution, of which no right-minded person would approve or participate today, and which no inhabitant of this nation, black, white, brown, or rainbow would endure . But none of us lived during Jefferson’s time. We did not experience the circumstances that influenced or compelled his decisions. What we do know is that Jefferson recognized that slavery was a “moral depravity” and “hideous lot” He stated early in his life about the institution of slavery, “This abomination must have an end.”  Jefferson believed the enslavement of other humans would come to a natural end as America progressed and developed, especially after slave trade to the U.S. was banned in 1808, while he was president. This belief was evident in his penning of the Declaration of Independence.

It is easy to look back and condemn the sins of our forefathers. We can see now with such pristine clarity that slavery was wrong and as detrimental to our entire nation as it was to our black citizens. It is a sin that we have endeavored to amend since the publishing of the Emancipation Proclamation and the passing of the 13th, 14th, and 15th Amendments to the constitution. Contrary to BLM and the Democrat party, we have attained equality of opportunity, foreseen in those amendments. It is unfortunate that race-baiting whores like Warren Wilhelm Jr. continue to pick at the sore, pitting one group of Americans against another. It is time to stop talking about mythical racism and get on with our lives as Americans.

It is time to stop our self-flagellation, stop degrading our heroes, and give thanks and reverence to those who sacrificed for the great country we have today. More than one hundred statues of soldiers and heroes from our past have been ripped down by the worst elements of our society, persons who have never put themselves in harm’s way or pledged themselves in defense of this nation. It is time that such mindless actions end. We patriots have had enough.

Only the depraved will prefer to worship George Floyd while degrading the memory of the man who gave voice to the American Revolution. Taking down his monument will not destroy Jefferson’s place in history. Erecting a monument to a thug will not make George Floyd a hero.

The Most Dangerous Man in America

The most dangerous man in America today is not hapless Joe Biden. Rather , it is  Merrick Brian Garland, the left-wing zealot who is the Attorney General of the United  States and the boss of the Federal Bureau of Investigation. Merrick, who rendered extreme liberal rulings from the Circuit Court Bench for more than twenty years, with his new-found powers, is now able to intimidate, persecute, threaten, and manipulate Americans who oppose the destruction of our nation by the Biden demolition crew. And from my perspective, Christopher Wray, the director of the FBI,  will be more than happy to accommodate the socialist attorney general. Wray did nothing but drag his feet at every effort by Trump to clean up the FBI. He  was more than happy to conduct predawn armed raids on any accused person who was acquainted with Trump. But he has made no move to arrest Hunter Biden even though he has been in custody of Hunter’s pornographic-filled computer for three years. And now that Wray has some new freedom-loving Americans in his sight, he can happily assist Garland in his persecution of mothers and fathers who oppose the left-wing indoctrination of their children by teachers and administrators in our public schools.

If you have any doubts  about the above assertions, you only need to examine Judge Garland’s statement in testimony given at his confirmation hearing or to examine his actions and the orders he has issued since taking office. You might also think about some of FBI  past actions against citizens, resulting in death, and destruction of private property. In the context of this article, consider the predawn armed raids on the homes of Trump associates by FBI swat teams; give thought to the events at Ruby Ridge in Idaho in 1992 when federal agents killed eight persons, including the 14-year-old son of Randy Weaver and Weaver’s wife, who was shot by an FBI sniper while standing in her doorway with a child in her arms (for good measure, they also shot the Weaver dog); think about the horror of the raid in Waco, Texas at the Branch Davidian compound in 1993 when 76 Davidians, including 25 children were burned to death by the FBI at the direction of then Attorney General, Janet Reno.

Now, let’s look at some of the actions taken  and statements made by the “honorable” Merrick Garland since taking office.

– Last week, The Justice Department filed suit against the state of Texas over its law to ban abortion after six weeks of pregnancy. Commenting on the suit, Attorney General Merrick Garland pledged to explore “all options” to challenge the measure and protect access to the abortion procedure.

– Attorney General Merrick Garland has threatened the governor of Texas with legal action over a new order from the governor’s office prohibiting non-law enforcement officers from driving undocumented people anyplace. Garland stated, “the United States intends to pursue all appropriate legal remedies to ensure that Texas does not interfere with the functions of the federal government.” (Meanwhile, chaos continues unabated at the southern border. And the states can do nothing to protect their citizens.)

– Attorney General Garland issued a memorandum on October 5th,  describing a need to address the “disturbing spike” in threats of violence, harassment, and intimidation against school officials. (This is consistent with Garland’s statements made during his confirmation hearings. It is noted that Mr. Garland failed to site any such threats because there are none.)

During his confirmation hearing, Merrick Garland made a dramatic claim about alleged right-wing-extremist violence. He had no problem condoning the actions of BLM or Antifa and refused to label the terrorists who burned down Portland, Oregon as criminals. Garland went to the extreme of comparing the bombing of the Oklahoma federal building to the parental protests of parents at schoolboard meetings.  He also happily described the unarmed demonstrators at the capitol on January 6th as violent insurrectionists, although not a single demonstrator carried a weapon. Garland appears to ignore all the violence taking place in our cities while vowing to set as his priority, a broad investigation of the “violent insurrectionist attack” on the Capitol.

The constitutional rights of Americans are under attack, and unfortunately, the  nation’s chief law enforcement officer is leading that attack. If the FBI, under his direction,  decides to raid your home at 4 a.m. and drag you away to jail, there is little you can do about it. With the strong arm of the FBI at his beckoning call, Merrick Garland can send them to get you whenever he deems you are a right-wing conspirator. With such powers, that makes Merrick Brian Garland the most dangerous man in America. Let’s thank God this left-wing zealot never made it to the United States Supreme Court.